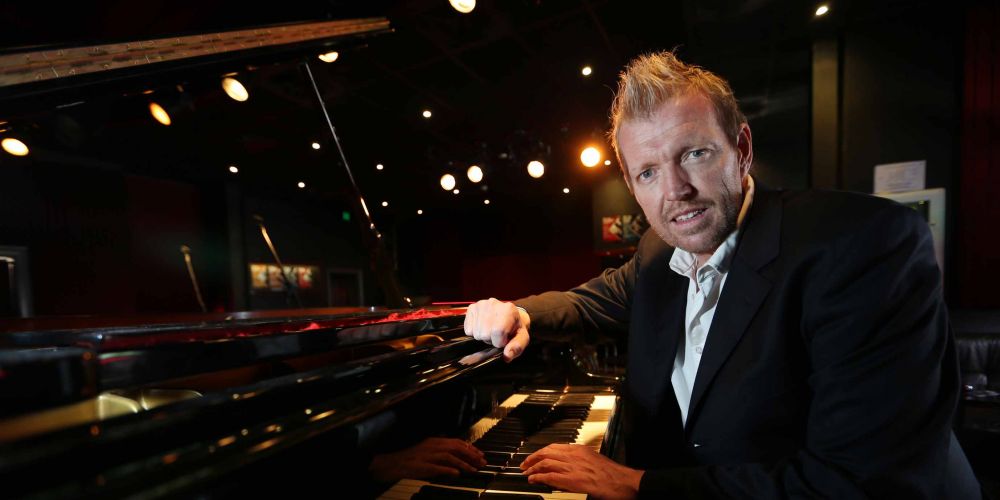 It is with real sadness that I report the premature passing of Perth pianist Graham Wood (pictured) last week, as he was a ‘great bloke’, and his death represents a truly enormous loss to both the Perth and national jazz scenes.

Despite (or possibly because) he had survived a near-fatal attack of cancer several years ago, Graham approached life with a positive energy which saw him achieve so much in such a short time.

An impressive pianist in many groups, the Graham Wood Trio (with Sam Anning and Daniel Susnjar) accompanied U.S. saxophonist Greg Osby in the MJC’s concert at Melba Hall in 2006, and he also appeared with Chris McNulty and Paul Bollenbach at Bennetts Lane on another visit here.

He founded the Ellington Club venue (filling the long-overdue need for a jazz club in Perth), and later founded the Perth International Jazz Festival, so he had been a major driving force behind Perth’s scene. I garnered his help for some national funding proposals, and always found him to be supportive of the broader jazz scene. He was also a hugely popular personality amongst his peers, as attested by the fact that several Melbourne-based musicians from Perth (such as Jordan Murray and Sam Anning) were flying to Perth for his funeral.

The Perth scene had suffered another major setback in 2008, with the tragic loss of JazzWA Co-ordinator Alan Corbert from suicide, but the scene there is a tight-knit community which works together in a crisis.

The Adelaide scene also had a similar tragic setback in May 2014, when saxophonist/ educator/bandleader Mike Stewart passed away prematurely from a heart attack, at 41. He had been the SA Jazz Co-Ordinator since 2007, and was also a popular figure, always in the centre of the jazz scene.

Such relatively young individuals – who are talented musicians, but are equally committed to working hard for the whole scene – are extremely rare. As such, their loss has a huge effect on fragile arts ecologies (such as a jazz scene).

As I pointed out before, in Melbourne we are extremely fortunate that club owners Michael Tortoni and Albert Dadon (as well as Serge Carnovale, Sonny Rehe and Roger Clark) have both the financial resources, passion and commitment to operate their respective venues (I hope that we can add David Marriner to that list, with Bennetts Lane Jazz Club, in the future).

After 27 festivals as Artistic Director (and, at times in the early days, surrogate part-time manager) of the Wangaratta Festival, Adrian Jackson was not reappointed for 2017.

Fortuitously, he has just been offered a position of Booking Manager for Bird’s Basement (owned by Albert Dadon, who was Chairman of the M.I.J.F. in 2004, when Adrian was the Artistic Director of that festival too). It should be a very positive development for both the venue and overall scene, in that his knowledge of the scene can be utilised to produce a strong local and international roster (while allowing Dadon more time to pursue his own musical commitments).

It is also a positive development to see that the Overground project that Sophia Brous created during her term at the M.I.J.F. (and which gave that event a certain ‘edge’ and character) has been incorporated into the Supersense Festival which she is again curating at the Arts Centre in August.

Speaking again of the Wangaratta Festival, they have extended their Early Bird offer. They will also be no doubt pleased to see that U.S. vocalist Jen Shyu has drawn first place in the Rising Star Female Vocalist Poll in the prestigious U.S. DownBeat magazine (previous MIJF artists, saxophonist Noah Preminger and guitarist Mary Holvorson, also won Rising Star Polls too).

With recent MJC performances, our monthly Thursday night (mostly double bills) at Uptown Jazz Cafe (replacing our monthly Saturday night performances there) got off to an impressive debut with the Lewis Pierre-Humbert Quintet and Stephen Byth Quartet this week. With a dynamic rhythm section of pianist Kade Brown, bassist Hiroki Hoshino and drummer Luke Andresen, Byth was able to deliver some impressive originals with real authority. This quartet certainly portents well for the future of the local scene.

Our Sunday night series at The Jazzlab has been slow to develop a solid audience base, but this is to be expected at this early stage. With an early 8.30 start and so many interesting restaurants in the area (such as Tibetan on Lygon Street), this is only a matter of time before more listeners embrace a ‘Brunswick night’ experience.

Our special co-presentation MRC co-presentation of the Johannes Luebbers Dectet’s 10x10x10 concert at The Salon, M.R.C., produced several highlights. The first piece alone, featuring Ben Opie, produced a tour-de-force of his virtuosic oboe playing, and alone was worth the admission price. And there were several other brilliant pieces premiered too. As the group had been based in Perth for most of their existence, it will take more time for Melbourne audiences to discover them, but no doubt this is only a matter of time.

We have a really special co-presentation coming up at The Salon on the 19th., with Christopher Hale’s “Ritual Diamonds” project (a collaboration with percussionist Minyoung Woo, from South Korea). Hale has assembled some of Australia’s leading improvisers, with Perth saxophonist Jamie Oehlers, Sydney drummer Simon Barker, and pianist Andrea Keller and trumpeter Scott Tinkler from Melbourne. This is a costly project, heavily subsidised by Hale himself, the South Korean government’s art funding, and the MJC, and not-to-be-repeated. Tickets can be purchased online, or anytime that the MRC’s Box Office is open (and avoid booking fees). I expect this to be a sellout, judging from the response so far.

Iin the last eNews, I mentioned my recent holiday to Japan. I forgot to mention that it was pleasing to see a good spread of Australian jazz in specialist jazz stores in Tokyo, Kyoto and Osaka. Pianist Joe Chindamo is, it seems, the most popular artist, as there is a DVD of one of his solo performances in Tokyo, as well as two volumes of The Joy of Standards released locally there. the Disk Union chain also had a feature on female Australian jazz vocalists, with Sydney artists Emma Pask, Janet Seidel, and Frances Madden, amongst others. The Necks were about to tour, but there was a good spread of Australian CDs, with Mike Nock well-represented, but also Bob Gebert Trio (for over $200!), Tim Stevens, Judy Bailey, Jex Saarelaht Trio, Allan Browne, Mark Isaacs, and numerous albums on the Rufus label, amongst others. Australian jazz artists should be making even more inroads into the Japanese market.

Finally, July 17 marked the 50th. Anniversary of the passing of John Coltrane at the age of 40. Surprisingly, there was no a great deal of coverage of such a watershed event in the history of jazz. 50 years on, yet so much of his music still speaks so directly…