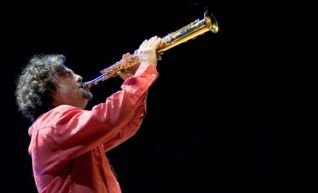 Tenor saxophonist, composer, arranger and educator Mirko Guerrini’s move to Melbourne from Italy has greatly enriched the local scene over the past decade. He toured back to Italy a few months ago, with performances including the Umbria Jazz Festival. For this concert he expands on a project that he initiated in 2017, when he first formulated the concept of a MJC Collective group that was formed from all bandleaders (and composers), to highlight the opportunities provided by the MJC.

The purpose of the Collective is to showcase some of Melbourne’s most talented jazz musicians in one ensemble. While it was too difficult to keep such a group together long term, the ever-productive Guerrini created an impressive book of his originals for a large ensemble.

He has added new works to be performed by this impressive sextet, in which he will be joined by his regular collaborators in the trio Torrio! –  Paul Grabowsky (piano) and Niko Schäuble (drums), together with Tony Hicks (reeds), Jordan Murray (trombone) and Philip Rex (double bass).