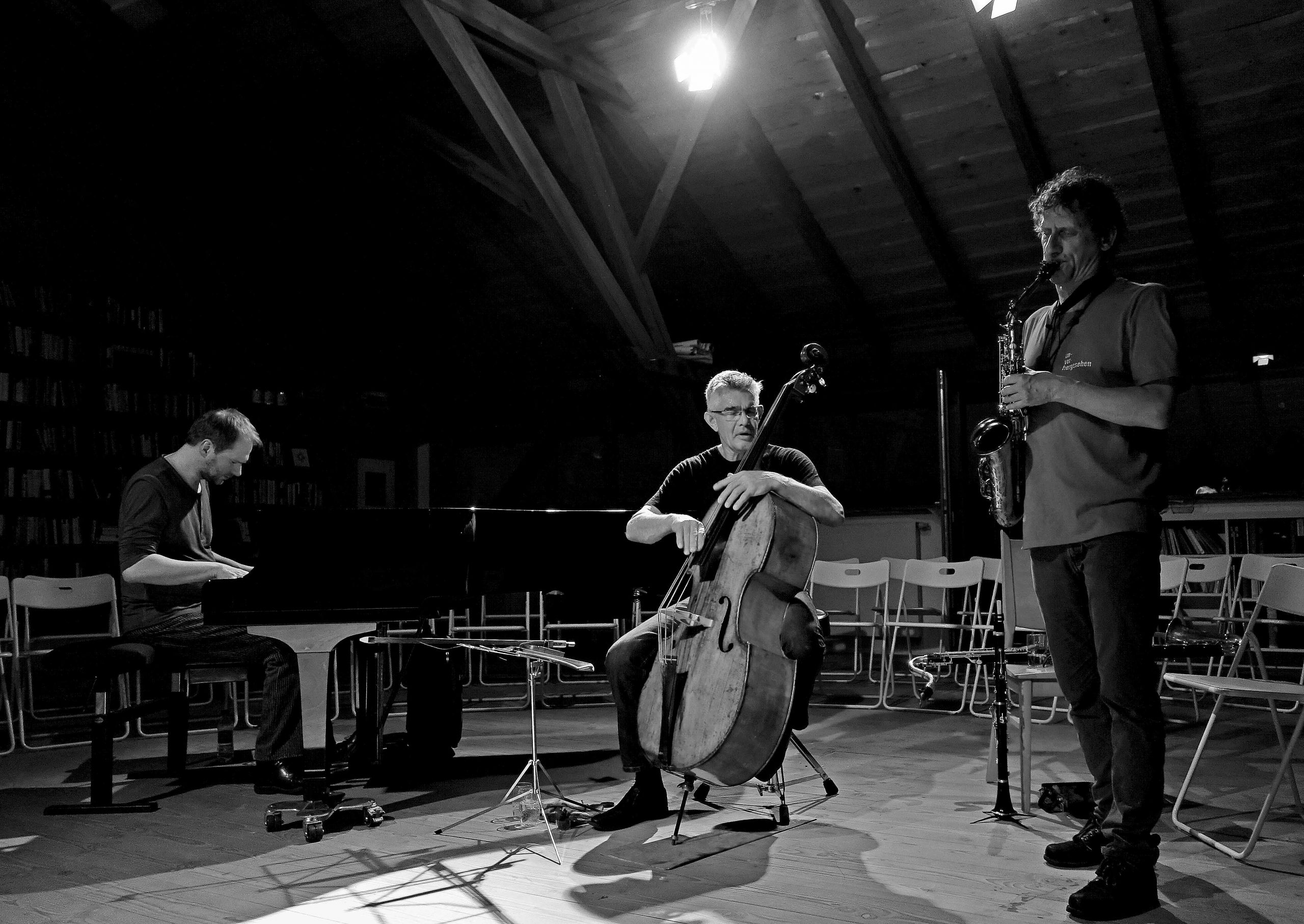 “The dynamic range is unheard of and unique, even within the world of (free) improvised music. These guys are grandmasters – that should be evident after all those years.“ – Herman te Loo – Jazzflits (The Netherlands) – about oblengths

In early 2002, Achim Kaufmann (piano), Frank Gratkowski (clarinets and alto saxophone), and Wilbert de Joode (double bass) first got together as a trio in Amsterdam. Since then, the three musicians have been touring and performing internationally on a regular basis, while constantly developing, deepening and enriching their musical rapport now documented on five CDs so far: kwast (on Konnex); unearth (on nuscope); palaë and oblengths (on Leo Records); and geäder (on gligg records). The trio’s music has been completely improvised from the outset, created in the moment. There have never been any rehearsals prior to concerts, premeditated structures or concepts – a fact that frequently flummoxes listeners, critics or even fellow musicians, as the three often manage to evoke the impression that their music could indeed be adhering to compositional presets. Kaufmann/Gratkowski/de Joode combine the transparency of early 21st century chamber music – silence, the moving into and out of noise regions, textural juxtapositions, the relics of almost tonal harmony surging up then evaporating just as quickly – with the energy, the rhythmic momentum and unpredictability of jazz and other rhythmically more aggressive musics.

To celebrate their ten-year anniversary as a trio in 2013, Kaufmann/Gratkowski/de Joode invited

Richard Barrett, Tony Buck, and Okkyung Lee to form the sextet SKEIN which led to a series of concerts and a release on Leo Records in 2014. An extended version of SKEIN performed at the 2016 Berlin Jazz Festival.

“Although it’s an acoustic ensemble, sounds that might ordinarily be heard as ‘electric’ figure that plasticity: There is ‘static’ generated by the bass, buzzy rumbling, spooky echoes, etc. plus characteristically clanky preparations, scraping, and generally a wide variety of techniques for mixing overtones & resonance — including ample ‘straight’ tone. (…) There are surely few ensembles that combine this level of individual talent & broad technical creativity with so many years of developing a collective style: The musical language they’ve developed is quite versatile, and they certainly seem to be at no loss for ideas. Might they just keep getting better?“ – Todd McComb, medieval.org – about oblengths

This tour is financially supported by the Goethe Institut