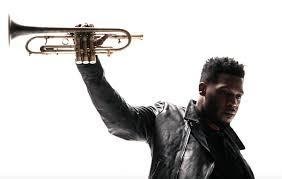 In Melbourne this weekend, the St. Kilda Jazz Summit is being staged at Memo Hall over November 2-4, mainly featuring vocalists.

If your preference is to hear some exceptional instrumental work, the Keyon Harrold Quintet begins their 5-night residency at Bird’s Basement on Wednesday, 6th.

For those who did not see trumpeter Harrold with Marcus Strickland’s Twi-Life group at Bennetts Lane in the 2016 MIJF, he is a rising star now.

As he works in several different genres, I was unsure what type of band that he would be bringing to Bird’s Basement for his gigs on November 6-10, but the band line-up is impressive, with Nir Felder (guitar), Shedrick Mitchell (piano), Dominique Sanders (bass) and Emanuel Harrold (drums).

Felder (who has previously toured here with Barney McAll) and Mitchell have been with Harrold for several years now, while he obviously has a longtime playing association with his brother on drums. I think that this should be a great band, and they are arriving on a tour after performances in Japan and China.

I missed seeing “It Must Be Schwing! The Blue Note Story” when it was screened during the MIJF, but saw it this week (as apart of the Jewish International Film Festival). There are, of course, several films on the Blue Note “story” now, and this one utilises many of the filmed interviews (and a Bud Powell story) from another German production, Julian Benedikt’s 1997 “Blue Note: A Story of Modern Jazz”. In many ways it is an update of the 1997 film, and is about 25 minutes longer, using animation to illustrate various parts of the story.
The result is a truly inspiring film that is a very effective tribute to the unique partnership of Alfred Lion and Francis Wolff.

In an age where Jazz Festivals around the world seem to follow the exact same roster, and record companies mostly direct artists in what they should record, it is invaluable to reflect on the point that Herbie Hancock and others eloquently stress: Lion and Wolff backed their judgement on unknown artists time and again (much as Adrian Jackson did with the Wangaratta Festival), and rarely made a mistake. And they always encouraged artists to record original work. Yes, times have changed…

Speaking of new recordings, there are several new CDs out, including Frank Di Sario’s “The Dreamers” and Nock/Stuart/Wilson/Zwartz’s “This World” (on Lionshare) – the latter certainly living up to its “all star” cast!

P.S. Fingers crossed for both our State and Federal funding results, which are due in the next few weeks.