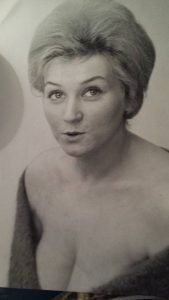 A younger Ruby Carter (probably in London in the 1960s)

It seems very strange to be coming up to the Melbourne Cup weekend, and not preparing to go to Wangaratta for the Festival.

There are some jazz concerts organised in Wangaratta (such as at The Gateway Motel and The Pinsent Hotel), but these are aimed at an older demographic, featuring traditional and mainstream artists (such as The Syncopators and Yvette Johansson, in a Tribute to Ella Fitzgerald and Louis Armstrong, on Friday, November 1). As such, they cannot expect to have too many patrons coming to Wangaratta just for these offerings.

In the absence of the Festival, some industry people have taken the initiative and organised a mini-jazz festival over the Cup weekend at Memo Hall in the historic St. Kilda RSL. (Coincidentally, there was a mini-Jazz Festival over the Cup weekend organised in the 90s at The Espy venue, featuring Kate Ceberano, and Sydney pianist/composer Dave MacRae – presented by the MJC – amongst the line-up).

It also a wonderful gesture to see the upstairs room, The Winnebago lounge, renamed as the Ruby Carter Lounge. As explained below, Ruby encouraged and supported many other artists, and is fondly remembered. Ruby was a larger-than-life character, and a real “jazz person”.
Many “experts” think that taking a year off will spell the end of the Festival, but I am confident that there accumulated goodwill can ensure a great attendance in 2020 at least (Whether it has a long-term future will depend on how well the new management and Board can learn from past mistakes).

Bird’s Basement has mainly presented more accessible jazz artists in the past year, so it is intriguing that they have booked the adventurous trio, Harriet Tubman, for a 5 night season. For those purists who sometimes criticise the conservative nature of the programming, this is an opportunity to support a rather daring presentation (especially in a club setting). I will certainly be checking them out over a few nights.

Congratulations to Kate Noonan, and the original Cookin’ on 3 Burners members on their awards. Congratulations also to pianist Joe Chindamo, who has been steadily building an impressive body of work as a “serious composer” over recent years (working with several orchestras around the country now).

Unusually, the next two MJC performances both feature ‘vocalists’. One is the unique innovative stylist, improviser and composer Gian Slater, for whom the term ‘vocalist’ in manifestly inadequate. Performing in a quartet of three ‘string’ players (including her brilliant brother), this should be a special context to hear her work. Her forthcoming album is already eagerly anticipated. Young guitarist Matt Hoyne emerged on the scene as an impressive ‘straight ahead’ soloist with the Liam Werrett’s quartet a few years ago. He produced his ‘mirror’ project to express a personal response to the world, and features vocalist Merinda Dias-Jayasinha (who moved here from Brisbane almost a year ago). It is pleasing to see a young artist producing a homogenous project, rather simply a set of tunes (as well as wanting to communicate with his audience).
Lastly, it is always good to see some more experienced musicians wanting to get involved in the ‘behind-the-scenes’ world (in this case, APRA AMCOS). Sydney bassist Jonathan Zwartz and Melbourne organist Jake Mason are both wanting to be elected to the APRA Board, and both would be worthy members. Good luck to both!