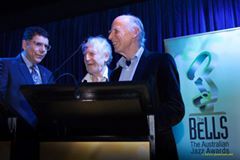 The combination of the Freedman Fellowship, the Australian Jazz Awards, and the APRA/AMCOS Professional Development Awards all been staged in September this year, this month provides several options for jazz artists to receive an extremely rare financial boost. Both the Freedman and Bell Awards have missed a year or two since they began, making it the 16th. Year for both. The jazz scene is certainly fortunate to have these two Awards, both set-up and funded by the philanthropy of two individuals: Laurence Freedman, and Albert Dadon. Australia clearly does not have the tradition of philanthropy that the U.S. enjoys, and when it does happen in the arts, and music specifically, it seems to always be for the European traditions of opera and orchestras.

So the jazz community should be appreciate of the largesse of these two supporters. This year the MJC has co-produced the Bell Awards (on a voluntary basis), and become aware of so many of the hidden costs behind such a project.

While virtually all of Melbourne’s jazz followers will be wondering who Manojlovic is, he has already performed at The Jazzlab for the MJC.

Ironically, when Manojlovic appeared with the Sydney quartet “Coursed Waters” on May 5 it was to a very “select” audience (only a handful of payers, sadly).

As I have explained before, it is always a challenge to draw an audience for an unknown interstate group, let alone a challenging “avant garde” one! In this case the sheer instrumental mastery and exciting interaction of Manojlovic, Sam Gill and James Emery (combined with Melbourne drummer James McLean) persuaded me to take this risk. When we deliberately keep ticket prices to the same level as local acts, I am always disappointed when more listeners (and particularly musicians) do not demonstrate some curiosity to check out new groups (and new music).

This is one of the key reasons why the Wangaratta Festival is both so unique and important: having paid for their ticket pass, audience members will go and hear groups that they would not normally go to hear (and often come away greatly impressed by their new ‘discovery’).

The A.A.O.’s forthcoming concert features Korea’s Hyelim Kim with Sydney’s Simon Barker: this is a pairing which the MJC presented in December 2017. The MJC presented Linda May Han Oh in July 2010 with vocalist Gian Slater, and this year Oh presented a superb major work at the MRC featuring Slater and her Invenio choir for the M.I.J.F. She will be touring here next year as part of Pat Metheny’s group too.

Manojlovic’s win demonstrates yet again that you never know what you might be missing when you do not take a chance on hearing young or unknown artists, and supporting them in the early stages of their career (when they most need the support).

Our next few concerts feature several outstanding young talents, including Flora Carbo (a finalist as Young Australian Jazz Artist of the Year) and her associates, such as Adelaide’s Bernard Alexander; Sydney’s Tom Avgenicos and Jacques Emery; Josh Bennier; Oscar Neyland; and Red Door Trio. Come and discover some of the Australian jazz ‘future’.

James Morrison is touring with his Jazz Academy Orchestra, but the Saturday concert at Monash University’s Alexander Theatre will help to assist the Australian Jazz Museum. So please consider supporting that worthy cause.

Adam Simmons has put in a great deal of time and effort to make a very detailed and impressive submission on behalf of the jazz community to the “Creative State 2020+”. It can be read via the link below (The MJC also made a submission, concurring with nearly all of Adam’s points). Last year, whilst on holidays overseas, I made the only detailed Jazz submission to the Senate Enquiry into the Music Sector (when no other sector representative responded in other States), so it is great to see Adam stepping up to add another voice.

Lastly, this edition of the eNews covers 3 weeks (rather than the usual fortnight) as I am having to take a some Personal Leave (unfortunately for some essential surgery, rather than a trip away).